Spantik, in between the countless mountain peaks of northern Pakistan, separates the Hunza region from the Baltistan region. It is here that the four highest mountain ranges on earth join. Like the wrinkles of a wise person, deep ravines, chasms and some of the highest, longest and most stupendous glaciers cover Baltistan.
Pakistan, 800’000 km2 wide and bordering in the south at the Arabian Sea, in the west at Iran, in the northwest at China and in the east at India, is a country of dazzling contrasts and diverse cultures. Deserts, glaciers, jungle and farmland, rivers, lakes and coastal lagoons – everything can be found in Pakistan.
Like the landscape, the people are equally diverse. United by a common faith, their lifestyle is very different. In the north and northwest, different mountain people such as the Kohistani, the animistic Kalash, the Hunza (Hunzukutz), the Pathans and the Afridi live. All their different, independent lifestyles make up the nationhood.
The Karakorum Highway (KKH), opened in 1978, made the northern region of Pakistan accessible. The impressive highway leads across 870km from Islamabad to the Pakistani-Chinese border.

Arrive in Islamabad. A representative of Karakorum Explorers will meet you outside the customs and immigration area at the airport. This representative will answer questions, brief you on the immediate arrangements, and escort you to the hotel in Islamabad. Discover the twin cities of Islamabad and Rawalpindi. Rawalpindi is an old British -era settlement and Islamabad is the capital city and administrative centre built some time after the partition of India in elevation in 1947. The cities are Located at about 1,500 feet in elevation in the hot and steamy plains of Pakistan’s upper Punjab. You may wish to explore Rawalpindi by wandering among its many and varied bazaars, or visit the imposing Shah Faisal Mosque superbly situated at the foot of the Margalla Hills. This mosque is one of the largest in the world, with room for 15,000 worshippers inside and 85,000 in the courtyard. This day we will attend a trek briefing at the Alpine club of Pakistan.

A thin ribbon of asphalt strikes north from near Islamabad and leaves the modern capital and the dusty Punjab plains far behind. As it weaves through sparse green hills, the first wrinkles of mountain-building in this geological ‘collision zone’, this unassuming road gives little hint as to what lies ahead. This is the high road to China, the Karakoram Highway (KKH), which was blasted and bulldozed through an intractable landscape of raging rivers, deep ravines and precipitous peaks in the 1960s and ’70s. It is a 1200km marvel of engineering and a symbolic collaboration between Pakistan and China. It is also a magnet for adventure-seekers.
Along the KKH you will encounter ancient towns of Taxila, Hassanabdal, Abbottabad, Besham, Dassu. It’s a long drive(13 hours) so the journey will start early from Islamabad.

Overnight at hotel in Chilas. Full Board, all meals included.

Thirty-eight kilometres south of Gilgit, the road to Skardu (170km) leaves the KKH and crosses a bridge and a spit of rock into the upper Indus Valley. Ten minutes from the bridge is a perfect panorama of the entire Nanga Parbat massif, and shortly afterwards there’s a brief view ahead to Rakaposhi south face. Fifteen minutes later the Indus is at its northern-most point. Another 15 minutes on (27km from the KKH) is the fuel stop of Sassi, a green island in a sea of crumbling rocks.
With its size, desolation and the non stop foaming fury of the Indus, the gorge from here south is simply awesome. Where there are no bridges, people still cross by pulling themselves hand over hand in a sphincter-puckering contraption consisting of a platform hung from a pulley on a single cable, often hundreds of metres above the river. At the truck stop of Thangus, 53 km from the KKH, look across the river for miners scraping out a living by burrowing into the mountain’s quartz veins for crystals.
Another 7km further on is a popular travellers’ stop at the basic Midway Hotel and, across the road, PTDC Astak, about 89 km from Skardu. About 31/2 hours from the KKH (21/2 hours from Skardu) is the regional centre Thowar. Across the river is Mendi, capital of the ancient Rondu kingdom. Below Basho the canyon opens into the vast Skardu Valley, and an hour later you’re in Skardu bazaar.
In good weather the 170km trip takes six to seven hours, with at least two police checkpoints. In rainy weather (eg summer storms and winter drizzle) multiple slides may block it completely.

Overnight in Hotel. Full Board, all meals included.

Day 4Briefing In The Ministry Of Tourism.

The expedition upon arrival in Skardu should see the officer concerned in Tourism Division for arranging meeting with the Liaison Officer and assistance on matters like insurance, purchase of rations and allied matters.
The rest of the day can spend sightseeing in Skardu.

Overnight in Hotel, Full Board, all Meals included.

We have a free day in Skardu if we flown the previous day. We have free time explore the town and visit the historic fort of Skardu situated 40 feet high on the northern hill side of main Skardu city. The fort lock from east and north angles by mighty Indus river, so it possesses tremendous strategically advantage and significant geographical position from military point of view. Therefore it is locally called “Kharpocho” which means Strong Fort. We’ll explore its narrow bazaars and in the afternoon visit Turquoise blue Sadpara Lake by bus or a jeep which is about four miles south of the town.

We will load our luggage onto jeeps. Together with the porters, we will drive for 6-7 hours along the scenic Shigar Valley, always following the Basha River. Just before the village of Arandu near Gon, we will pitch up our first camp. Our trip through the Basha Valley may hold some surprises – such as when landslides block the road, requiring a short bypass on foot. Overnight stay in tents.

From now on, we’ll continue on foot. We will start walking through the beautiful village of Arandu. A little later, we will cross the enormous Chogo Lungma Glacier for the first time. Our hike will take us along the glacier onto the lateral moraine. Within 5-6 hours, we should reach our first camp on the northern side of the Chogo Lungma Glacier, near the mountain pasture of Chogo Brangsa. The Baltistani porters, who joined us in Arandu, will carry most of our luggage, in precisely measured loads of 25kg. Overnight stay in tents.
Overnight in tents. Full Board, all meals.

We’ll continue along the side of the Chogo Lungma Glacier and then cross a side glacier. After about 6-7 hours, we’ll reach our second camp for the night. Overnight stay in tents.

Overnight in tents. Full Board, all meals included.

Today, we’ll step foot onto the giant glacier already in the morning and move across crevasses and piles of rubble. We’ll spend the next hours on the glacier, from where we can enjoy the beautiful view of Spantik and many other photographic scenes. After 5-6 hours and some final exertions on the last steep slope, we can finally set up our base camp on a green shoulder below our ascent route. Overnight stay in tents.
Overnight in tents. Full Board, all meals included.

In view of good acclimatisation, we will use today as a rest day. Overnight stay in tents.

We will have plenty of time to climb Spantik. With the help of our porters, we will set up 3 camps and secure short sections of the route with fixed ropes.
Camp I: 5050m
Camp II: 5450m
Camp III: 6300m
Ascent Route: Our route starts near our base camp with a steep but technically easy ascent through a rocky area. We’ll reach the crest of the first plateau, where we will set up camp I (5050m). We’ll follow the ridge up to a short, steep descent to another plateau where we will set up camp II (5450m). We’ll then climb another 200 meters along the ridge, before reaching the steep flanks of Spantik II, which will lead us up to camp III (6300m). Depending on the conditions, we will set up fixed ropes to provide maximum security. After Camp III, the route leads over wide snow fields. We will form roped parties up to the south ridge of the main summit. Along the ridge, we will we can climb to the summit (7027) in technically easy terrain.

We will start early in the morning and cross the Chogo Lungma Glacier once more to descend into the valley. On the way back, we will only need one intermediate camp, which we will pitch up just above Chogo Brangsa. The beautiful view from here is inspiring to reflect on our journey and document it photographically. Walking time: 7-8 hours. Overnight stay in tents.

Once again, we will start early. We’ll take the same way back to Arando, which we should reach in 4-5 hours. From here, we’ll drive back to Skardu by jeep. Overnight stay in tents at a hotel in Skardu.

If the weather allows for it, we will enjoy a wonderful flight over the Karakorum back to Islamabad. Overnight stay in Hotel.

Today, we will have time to visit the bazaars, do some shopping and enjoy Islamabad. Overnight Hotel

Day 33: Flight back from Islamabad

Drop you to the airport for your home flight 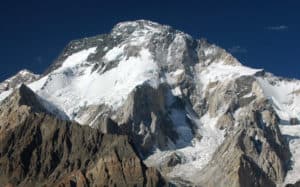 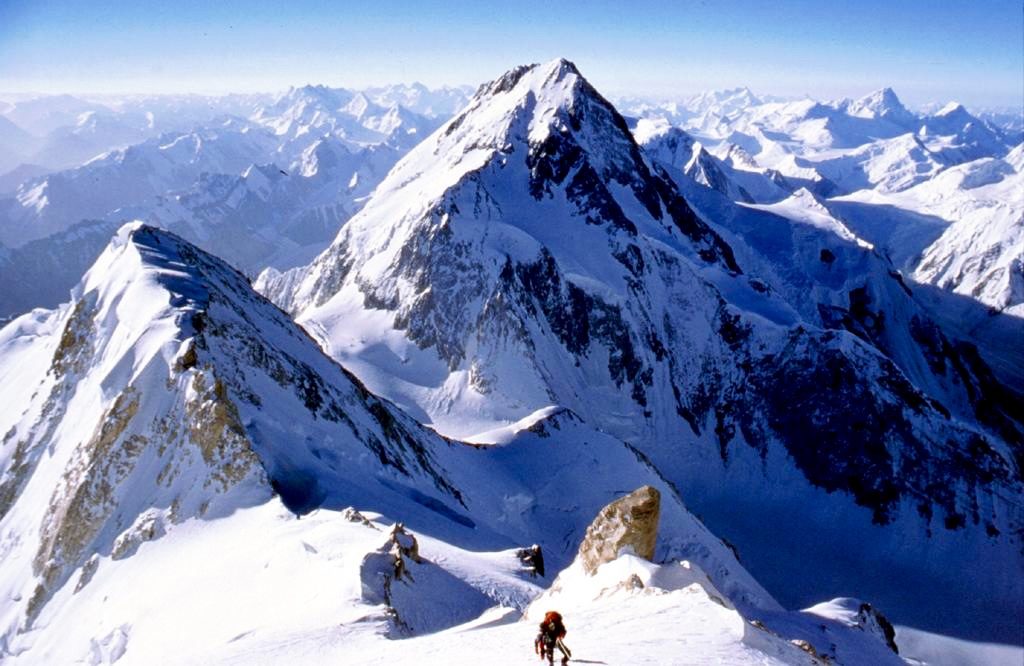 Gasherbrum I and II Expedition