Fairy Meadows and Kingdom of Hunza

Fairy meadows, so named because of local superstition that fairies inhabit this spectacularly forested alpine meadow, is a wonderful setting from where to explore Nanga Parbat. One will drive from Gilgit to Fairy Point, and from there walk a few hours to fairy meadows. Shepherd’s huts are scattered around the area, and clear water is plentiful coupled with the pine forests and the looming north face of Nanga Parbat, one can readily believe that fairies really do live in this alpine meadow. The next day’s trek will lead to the base camp of this trek, Beyal, from where day excursions will be made to the German memorial to those killed in the 1937 expedition, and to the foot of Jiliper peak. On the return, stop for the night at fairy meadows, before trekking to the road head and driving back to Gilgit. Then we go to Hunza to visit the forts of Altit and Baltit and off course to see some beautiful peaks over 7000m.

Welcome to Pakistan, one of representative from Karakorum Adventure will receive you at Islamabad International Airport and transfer to hotel.

Today, we will make a city sightseeing tour of Rawalpindi and Islamabad, which offers a great contrast of culture, archaeology and planning. Rawalpindi is an old city with narrow lanes and bustling bazaars while Islamabad is a modern and the only planned city of Pakistan serving as the capital of the state. Raja Bazaar, Murree Road, Pakistan Monument and Shah Faisal Mosque are the places of tourist interest included in the tour.

Early morning we will drive to Besham, en-route we will visit the Taxila Museum, Gurdwara Panja Sahib at Hasan Abdal and Ashoka Rocks in Mansehra.Taxila Museum is located 35 km from Islamabad on the Grand Trunk Road to Peshawar. It is famous for remains of Gandhara art. Most of the sites at Taxila, dating back 600 BCE to 500CE, are located around the Taxila Museum. There are 4000 objects displayed, including stone, stucco, terracotta, silver, gold, iron and semiprecious stones. Mainly the display consists of objects from the period 600 B.C to 500 AD. Buddhist, Hindu and Jain cultures are well represented through these objects discovered from three ancient cities and more than two dozen Buddhist Stupas and Monasteries and Greek temples.
Hasan Abdal is 48 km from Rawalpindi. It is a beautiful, quiet place and a convenient halting point of G.T. Road enroute to Peshawar or Abbottabad. This town has a particular association with Mughals and Sikhs. It was mentioned by Emperor Jahangir in his memoirs and frequently visited by successive Mughal Kings, on their way to Kashmir. It remained a holy place for various religious groups through the ages. It has a Sikh Gurdwara (temple) known as Panja Sahib having a sacred rock with the handprint of their religious leader, Guru Nanak. Twice a year, Sikh pilgrims visit this Gurdwara from all from all over the world.On the north side of town is Mansehra’s tourist attraction, three granite boulders on which 14 edicts were engraved by order of the Mauryan king Ashoka in the 3rd century BC. Appalled by the destruction wreaked by his military campaigns, Ashoka converted to Buddhism and tried to dictate a new morality based on piety, moderation, tolerance and respect for life. He was greatly revered, but his reforms (and his empire) didn’t last much longer than he did.The inscriptions have done better, but they too are fading away; despite the shelters, the ancient Karoshthi script is now almost impossible to see. The rocks uphill are better than the one below the road.
Overnight at Hotel.

Today following the upstream course of River Indus, we will make photo stops at Shatial rocks with ancient graffiti on it. After a 205 km distance cover in 7 to eight hours we reach to chilas. Chilas is a small town located in the Gilgit-Baltistan, Pakistan on the river Indus. It is part of the Silk Road connected by the Karakoram Highway and N-90 National Highway, which link it to Islamabad and Peshawar in the southwest, via Hazara and Malakand Divisions of Khyber Pakhtunkhwa. In the north, Chilas is connected to the Chinese cities of Tashkurgan and Kashgar in Xinjiang, via Gilgit, Aliabad, Sust, and the Khunjerab Pass.
Chilas comes under Gilgit-Baltistan.It is the Headquarter of District Diamer.The weather is hot and dry in the summer and dry and cold in the winter. It can be reached through Karakoram highway and also from the Kaghan valley passing over the Babusar Pass. Chilas is situated on the left bank of the mighty river Indus, we arrive at Chilas and transfer to hotel for overnight.
Overnight at Hotel.

Morning after breakfast we will visit the the cpan rock carvings and drive (2 hours) to Raikot Bridge. From here, drive one hour by 4 wheel jeeps to Tato village through the narrow gorge of Raikot. After Tattoo, 2 hours trek on the pony trails through the thick covered pine forest leads to fairy meadows.
Meals and overnight in huts.

Excursion towards Nanga Parbat base camp. (north face of Nanga Parbat 4000m). An easy and gentle walk through the green meadows covered with thick pine and birch forests. After beyal we cross ganalo glacier and then we walk on lush green grassy meadows. Visit alfred drexel monument and explore the area. After lunch trek back to Fairy meadows. (7 hours),
Overnight in huts.

Trek back to Tato Village. Drive to Gilgit an important market place on the Silk Road. Visit the Buddha carved in rock at Kharga and exploration of the town. Many shops show the precious stones, which are found in all the area.
Overnight at Hotel.

Drive to Karimabad. Perched on the bank of the Hunza River the town is shadowed by Ultar, Lady Finger and Rakaposhi peaks. On way stop to admire the view on Rakaposhi (7788 m). In Hunza we can Visit the Altit and Baltit Forts. Afternoon drive to Duikar viewpoint for sunset photography of many countless peaks above 7000 m in Karakorum and enjoy the birds eye view of Hunza and Nagar valleys.
Overnight at Hotel.

Karimabad the central Hunza the highlight of your trip breathtaking views of Rakaposhi Ultar and Golden peak will let you wonder in this nature’s wonder of the world. Here the heights and magnitude of things are redefined and every thing elsewhere in the world seems so small.
In the morning after breakfast visit Baltit fort, one of the high valleys between China and Indian subcontinent. Facing Rakaposhi Peak, one of the highest mountain peaks in the world, Baltit Fort is poised majestically above Karimabad, the present day capital of Hunza (Baltit was the capital of the old state of Hunza, and is now included in the Karimabad settlement area). Located on the rocky upper level of the Hunza hill and surrounded by Ultar Bar to the east, the Hyderabad Har to the west, Mount Ultar and its subsidiary range to the north, the Fort offers breathtaking views of the magnificent high mountains as well as a bird’s eye view of the villages in the valley. Baltit Fort has great historical, cultural and symbolic value to the local community. Historically, it was the seat of the Mirs of Hunza, a family that ruled the region for centuries. Culturally, with some buildings dating back to 12th century, it is a record of the architectural evolution of the area. The main building is an impressive stone structure with intricately detailed timber features. Its architecture is a significant example of Pakistan’s diverse heritage, reflecting distinct Tibetan influence as seen by the presence of a Tibetan ‘sky-light’ in the roof. Socially, the fort and the surrounding settlements are valuable symbols and reminders of man’s creativity and persistence in overcoming an unfavorable and hostile natural environment for the purpose of survival.
Altit Fort: It has been built on a sheer rock-cliff that falls 300 meters (1000 feet) into the Hunza River, and is much older than the Baltit Fort. View of Altit fort, with the central town to the right and below the fort. The extreme gullies, sharp drop-off, and location high above the river made this settlement highly defensible and an older settlement than many in the central valley. The majestic historical Altit fort is center of attraction due to its architectural design and strategic location. Altit is the birthplace of the Hunza Kingdom and Altit fort is the first fort of the region. The fort has been constructed in six different stages by using various natural levels of the rock. The construction has been made right on the edge of a sheer rock cliff that drops 1000 feet straight down to the Hunza River. In the beginning it was built as a palace, soon after the addition of the watchtower a defensive architectural element it transformed to a fort. There is great possibility that different stages of the fort have been constructed during different times because the actual age of the fort is said to be more than 800 years. This fort is said to be around 50-100 years older than Baltit Fort.. We can also have breathtaking view of Hunza and Nagar valleys from the Fort.
Overnight at hotel.

Early morning drive to Duiker viewpoint to have the magnificent sunrise view of the Rakaposhi (7788 meters) Diran peak (7200 meters) Golden peak and Ultar group of peaks and many countless peaks can be seen from here. After breakfast drive to Hoper village in Nagar valley to enjoy the apricot tree spring blossom and short hike to the Hopper glacier. After lunch drive back to Karimabad.
Overnight hotel.

Today, we will take U-turn and start our journey back toward south. Along the way we will stop over at Rakaposhi View point for tea break and photography. Again we will stop at Gilgit for Lunch and Continue our journey in gorges of Indus to Chilas, our destination for the night.
Overnight hotel

Here starts another adventure as we start driving to a newly constructed track and cross Babusar Pass at 4100m and descend in to Kaghan Valley. Kaghan, an alpine valley is completely different from the landscape of Gilgit-Baltistan and offers green hills and forested mountains. We pass through the summer settlement of Gitidas, Lulusar Lake and villages of Burwai, Jalkhad and Batakundi to arrive in Naran, the main attraction of the valley.
Overnight hotel.

Early departure for Paya, a vast plateau at the foot of Makra Peak, bordering Kaghan with Azad Kashmir. After enjoying a superb panorama around, we drive down to main road and reach Balakot, the last town of Kaghan Valley while descending. Balakot is settled on the banks of River Kunhar, the lifeline of the Kaghan Valley. After a short break, we resume driving to Mansehra and reach Islamabad after crossing Abbottabad, Haripur and Taxila.
Overnight hotel 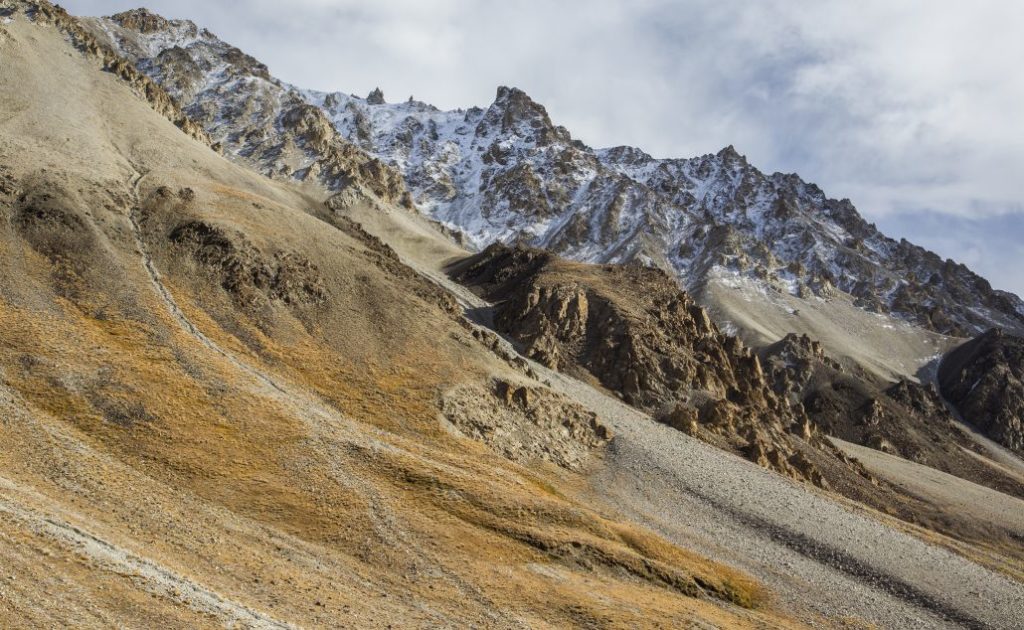 The Three Passes of Wakhan