Baltoro and K2 Base Camp Trek

At the heart of the Karakorum, the glacial junction known as Concordia is dominated by huge, encircling peaks. Just 10 kilometres from the precipitous face of K2 (8611m / 28,251ft) and nearer still to Broad Peak (8047 m / 26,401ft) and the stupendous Gasherbrum IV, this is unquestionably one of the most spectacular places on earth. Following generally good trails, our week-long approach to this remote spot takes us from the village of Askole into a wilderness of rugged valleys and towering peaks. Each day the scenery becomes more impressive as we trace a route across the moraines of the vast Baltoro Glacier, overshadowed by the sheer granite walls of the Trango Towers to our left and the shapely summit of Masherbrum to the right. Including the option to walk from our camp at Concordia to K2 Basecamp, this universally acclaimed trek is well within the capabilities of keen hill walkers.

Arrive in Islamabad. A representative of Karakorum Adventure will meet you outside the customs and immigration area at the airport. This representative will answer questions, brief you on the immediate arrangements, and escort you to the hotel in Islamabad. Discover the twin cities of Islamabad and Rawalpindi. Rawalpindi is an old British -era settlement and Islamabad is the capital city and administrative centre built sometime after the partition of India in elevation in 1947. The cities are Located at about 1,500 feet in elevation in the hot and steamy plains of Pakistan’s upper Punjab. You may wish to explore Rawalpindi by wandering among its many and varied bazaars or visit the imposing Shah Faisal Mosque superbly situated at the foot of the Margalla Hills. This mosque is one of the largest in the world, with room for 15,000 worshippers inside and 85,000 in the courtyard. This day we will attend a trek briefing at the Alpine club of Pakistan.
Breakfast included.Overnight in Hotel.

In the early morning, we will fly to Skardu. Skardu, capital of Baltistan is perched 2,438 metres above sea level in the backdrop of the great peaks of the Karakorams. Balti people are a mixture of Tibetan and Caucasian stock and speak Balti, an ancient form of Tibetan. Due to the similarity of its culture, lifestyle and architecture with Tibet, Baltistan is also known as the “Tibet-i-Khurd” (Little Tibet). It borders on the Chinese province of Xinjiang and Indian-occupied Kashmir. The tourist season is from April to October. The maximum temperature is 27 C and minimum (October) 8 C. Apart from its incomparable cluster of mountain peaks and glaciers Baltistan five valleys – Shigar, Skardu, Khaplu, Rondu and Kharmang are noted for their luscious peaches, apricots, apples and pears. About 55 minutes flight from Islamabad to Skardu, During the flight you will see the mighty Nanga Parbat in the Himalaya range, the Karakorum Range and Hindukush range.
overnight Stay In the Hotel

We have a free day in Skardu if we have flown the previous day. We have free time explore the town and visit the historic fort of Skardu situated 40 feet high on the northern hillside of main Skardu city. The fort lock from east and north angles by mighty Indus river, so it possesses tremendous strategical advantage and significant geographical position from the military point of view. Therefore it is locally called “Kharpocho” which means Strong Fort. We’ll explore its narrow bazaars and in the afternoon visit Turquoise blue Sadpara Lake by bus or a jeep which is about four miles south of the town.
If by road drive to Skardu first 2 hours along the Indus river and then we turn northeast towards Skardu near Jaglot by crossing Alam Bridge over Indus. The drive through the Indus Gorge is guaranteed to knock your socks off! The view after crossing the Raikot Bridge of Nanga Parbat is without any parallel. Standing at around 1,000 m. you see a mountain which rises to above 8,000 m! This is the largest land escarpment in the world. This is also where the three greatest mountain ranges meet; Himalaya, Hindukush and Karakorum. Mashabrum Hotel Skardu. Approx. 8/10 hrs
Full Board, all meals included.

We will travel by jeep with our crew and supplies along the Shigar and Braldu valleys to Askole. Village in Shigar have changed little in over five hundred years; farms with fields of barley, wheat and vegetables surrounded by stone walls and stands of poplar, willow and apricot trees. The apricot is a very important crop in the north, having a multitude of uses to the Balti and Hunzakut people. Villagers greet us as we pass through on the rugged dirt and stone road that leads to Baltoro. As we approach, the landscapes become desert-like and once within the sheer valley of the Braldu, it is necessary to cross the river several times by suspension bridges. At various points, the road may have collapsed due to erosion and we will transfer the gear across on foot to a vehicle on the other side. The journey may take anywhere from six to twelve hours, with patience, we will arrive at our first camp of the trek. In Askole the villagers grow their own cereals, vegetables and fruit and own large herds of sheep, goats and dzos. Overnight in tents. Approx. 8 hrs.
Full Board, all meals included

After considerable organisation of equipment, supplies and porter loads for the journey ahead, we commence trekking towards Jhola. The valley opens out to reveal the Biafo Glacier flowing for more than fifty kilometres from the Hispar La pass to the Braldu. We have our first taste of moraine walking as we cross the snout of the glacier and descend to our lunch spot beside the river at Korofon. We also experience the harsh, stark environment that forms the base of these great mountains. Our route takes us to the confluence of the Braldu and Dumordo Rivers where the infamous flying fox or ‘jola’ is located. It is still there, however a footbridge has now been built making the passage much easier by every perspective. (Consider individual passage of 50 to 70 people with loads, compared with walking straight across a steel bridge!). In past years it was necessary to make a high traverse across a rocky face and descend steeply to the riverside of the Dumordo to gain the flying fox. There is now a safe and pleasant pathway above the river. It is this valley, fed by the Panmah Glacier, which was once a passage between Baltistan and Yarkhand across the West Mustagh Pass (5370m) into China. Once across, we descend beside the river to the Braldu and then follow along its banks to our camp at Jhola. Overnight in tents. approx 7/8 hrs
Full Board, all meals included.

To Paiju (3450m) approx 7 – 8 hrs. The route is mainly at riverside throughout the day, switching up and down somewhat according to the level of erosion and water levels of the Braldu. The Masherbrum Group may be glimpsed to our right via the Xiangang Valley. The range is a vast array of peaks that extend almost the full length of the southern side of Baltoro. Walking conditions are hot and dry and care must be taken to prevent sunburn, as we approach camp several small glacially fed rivulets flow down from the north and the first peaks of the Trango and Uli Biaho group appear on the distant ridgeline. The vast snout of the Baltoro glacier, the fourth longest in Pakistan, is also visible but it’s hard to gather a sense of scale from here. Overnight in tents at Paiju. approx 7/8 hrs
Full Board, all meals included.

An important preparatory stage for our crew and porters. Our goats are slaughtered and roti (breads) baked throughout the day for the journey ahead on the glacier. It is a welcome opportunity for us to relax, read and take photos. Perhaps do some washing and simply enjoy being in the mountains.
Full Board, all meals included

Making the short approach to the glacier, the great expanse of ice stretching across the Braldu comes into perspective when we see the many porters forming an ant-like trail across it. Ice cliffs tower more than sixty metres above the turbulent waters at the origin of the Braldu River. As a result of its continually changing nature, the glacial moraine may be difficult to trek upon at this stage and our route varies somewhat each time. One should be prepared for a hard day of walking and carry plenty of fluid. Once on the other side, the trail will hug the side and occasionally necessitate a glacier or river crossing. There are now uninterrupted views of Paiju Peak (6610m), Uli Biaho group, Trango Group and Cathedral Group – a majestic, spired collection of mountains that the Karakoram is so well known for. Behind us, the steep grassy slopes make high grazing pastures for ibex and the rocks are home to mouse hares (Pikas) and colourful hoopoe birds which forage for food scraps. Overnight in tents. approx 7/8 hrs
Full Board, all meals included.

Biango. For the first two hours we walk along the rest of the lateral moraine. Across the Baltoro glacier we have exciting views of Paiju Peak, Choricho (6700m), Uli Biaho, Trango Towers, Cathedrals, and Biale (6750m) .After crossing the green pastures of Urdukas (approximately 4050m), we cross the side crevasses, then walk on the medial moraine of the Baltoro to Biango campsite. Biango, at 4250m, is part of the Yermanadu Glacier flowing down from Masherbrum Pass (17,594 ft). From here we have a spectacular view of the snowy triangle of Masherbrum (7821 m), the 24th highest peak in the world. Seven to eight hours hiking.
Full Board, all meals included.

Trek seven to eight hours to Concordia. As we make our approach, Gasherbrum IV (7925 m) stand guard in the east, with Gasherbrum II (8035 m) peering from its right shoulder, More extraordinary mountain views await us at Concordia, where we see K2 (8611m), Broad Peak (8047 m), Golden Throne (7285 m), Mitre Peak (6560m), and a vast array of other peaks. Six to seven hours walking.
Full Board, all meals included.

This day is reserved to regain the lost energy on the trek and enjoy the great panorama.

Day excursion to K2 base camp. We start hiking from Concordia, cross the crevasses of the Baltoro Glacier; walk on the Medial moraine of the Godwin-Austen Glacier through the Broad Peak base camp to K2 base camp we take a around one hour lunch break on broad peak base camp and then continue to K2 base camp. will visit k2 memorial and In the afternoon walk back to Concordia. Overnight in tents. approx 11/13 hrs
Full Board, all meals included.

Day 13 Trek back to Urdukas

Trek back to Urdukas though the same route we went up to Concordia. Eight hours trek. Overnight in tents.
Full Board if at base camp, all meals included.

Day 14 Trek back to Paiju

Trek back to paiju directly from urdukas and going to skip khabursay campsite .seven to eight hours trek Overnight in tents.
Full Board, all meals included.

Day 15 Trek back to Jhula

Trek back to Jhula.six to seven hours. Overnight in tents.
Full Board, all meals included.

Day 16 Trek back to Askole

Trek back to Askole.Six to seven hours trek. Overnight in tents.
Full Board, all meals included.

By jeep to Skardu. Meet with jeeps and drive to Skardu, passing through many picturesque villages perched on vertical rocks. This part of Baltistan appears greener and more prosperous than on our drive to Askole. Overnight at Concordia Motel/Mashabrum Hotel, Skardu.
Full board, all meals included.

Drive along the bank of Indus river on Skardu Gilgit, enjoying fascinating views of Karakoram Peaks from a different angle. We might stop at Astak Nala for lunch. Arrive Chilas on the bank of Indus river, overnight at hotel Chilas. (255 KM, 8 to 9 hrs drive). Night stay at Shangrila Midway House. Chilas.l.
Breakfast is included

Full day drive on Karakoram Highway to Islamabad. We start early in the morning, to cover the 12 hours long drive.

Transfer to airport and fly home from Islamabad. 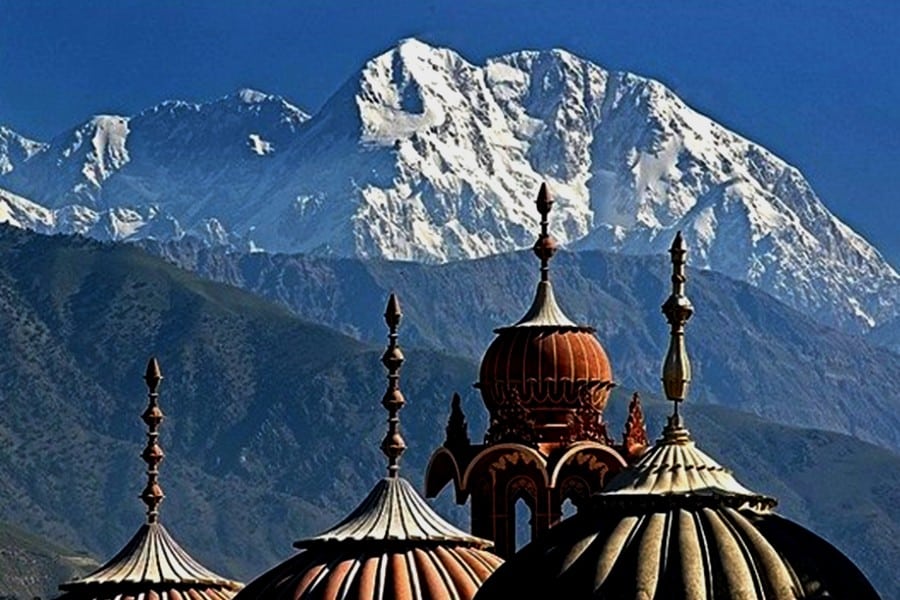 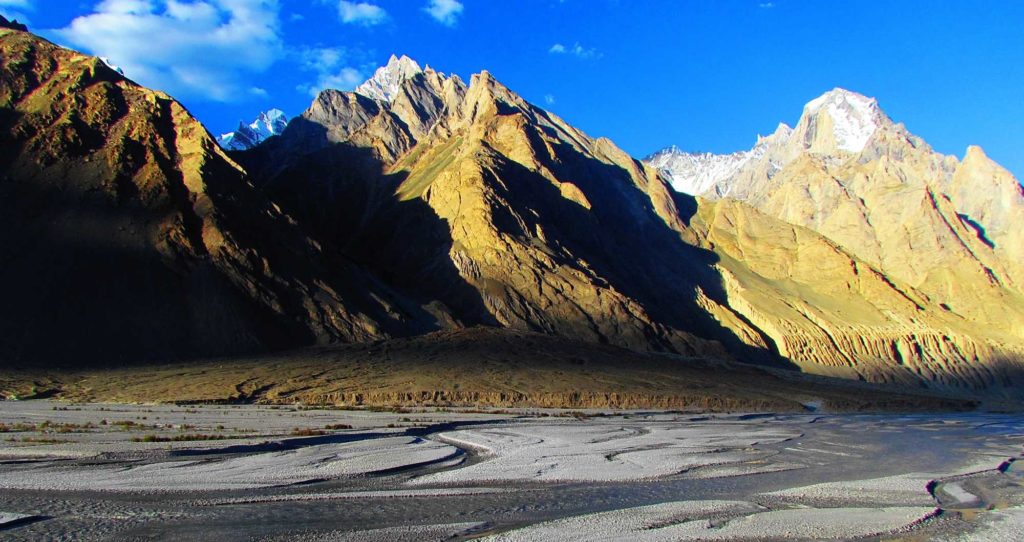